Hi everyone! I hope you’re all doing well.

Today’s post is following on from the first account of my 3.5 month mammoth travel trip around South-East Asia, starting with North Thailand.

After our time in the North of Thailand we reluctantly booked the notorious two day slowboat into the beautiful, landlocked country of Laos. It’s an overlooked and underrated country due to the fact there are no beaches, however I genuinely think if I had to pick one, it might have just been my favourite country we visited; the people were so sweet and lovely, the food was delicious and the scenery was always beautiful. It was certainly one of the lesser touristy, Westernised countries we spent time in.

The few options to get into Laos were unappealing to say the least. We were looking at:

It’s safe to say I was dreading this journey, however… it strangely turned out to be a highlight of my trip. Don’t get me wrong; the experience was very hot, sweaty, uncomfortable at times and of course, slow. However, the two day trip brought a sense of tranquility and simplicity I’d not experienced before. 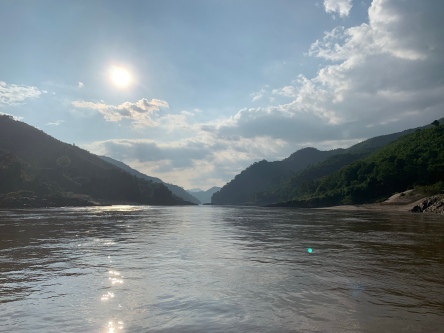 The journey was split to about 6 hours each day, and we glided along the Mekong River peacefully, with a gentle breeze in the air, waving to excitable kids on the river bank and catching a glimpse of life in the tiny villages dotted along the way.

I would highly recommend the slowboat as a means of getting into Laos. As I said, the other options are major no-go’s, so book yourself onto the slowboat and just embrace it.

As we’d expected, the slowboat was actually a really social affair. We got chatting to a group of people, played card games and drank Thai Sangsom rum to pass the time.

Most of the seats are old chairs ripped from buses and cars, so it’s actually pretty comfy. Once the first leg is over, you stop over in a tiny riverside village for the night called Pakbeng, which was interesting to say the least. The only ‘tourism’ Pakbeng gets is from the slowboat overnight stops, so it can be pretty overwhelming when you step off/get yanked off the boat! You’ll be offered a few different accommodation options, such as shared rooms or privates, all priced super cheaply; at the end of the day, they’re all pretty similar, so it doesn’t matter which one you go for.

In Pakbeng, we simply ate some dinner at one of the villages two restaurants and had a few drinks at it’s only bar – a unique experience, we genuinely really enjoyed this one simple night from a totally different perspective. 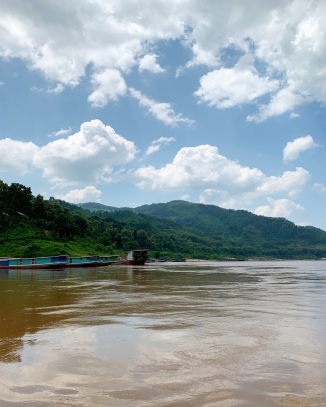 Once Day 2 was over, we arrived into Luang Prabang.

Luang Prabang was 100% one of my favourite destinations of all. I don’t think I’ve ever felt as chilled out in my life as I did in Luang Prabang! 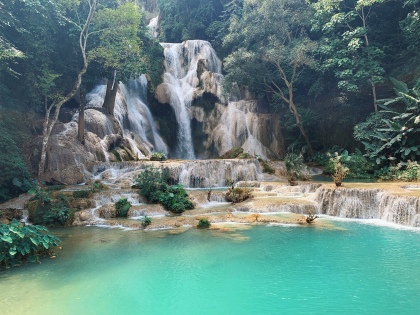 These are said to be the most beautiful falls in Asia, and I really do not doubt that. It’s rare to see something so genuinely breathtaking, and I remember just feeling so happy and content exploring and relaxing here all day – it was without a doubt one of my favourite days on the whole of our travels, and I felt super grateful to be experiencing something so naturally stunning. Okay, cringe over now.

The turquoise blue waters here are full of Garra Rufa fish (you know, the tiny nibblers in the ‘fish spas’ that became popular in the UK for all but a year, until people realised they were spreading diseases. Yeah…) So, when you’re swimming around, expect a couple pecks.

South East Asia is peppered with various night markets and stalls, however the one in Luang Prabang was our favourite of the whole trip. From gorgeous clothing, jewellery made of bomb shrapnel from the Vietnam War, bamboo straws and cutlery and hand-painted fans, this market really had it all and didn’t feel as ‘tacky’ as you might expect. I managed to get a handful of souvenirs for the family here, and I’m really glad I did.

We discovered a stunning spot aptly named ‘Utopia‘ 2 minutes around the corner from our hostel, which was ideal for breakfast, lunch, dinner and evening drinks. Essentially, it specialised in and absolutely nailed everything. The view from the outdoor area was gorgeous and there was such a chilled out vibe there – I honestly could have plonked myself there with a smoothie and sat all day. They also had a vegan menu, which is always major brownie points for me! 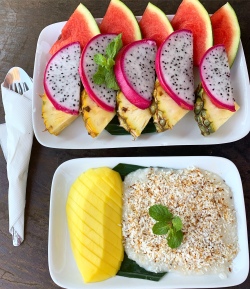 One evening we trekked up to the temple on top of Mount Phusi to watch the sunset. Again, a very tranquil, appreciative and content moment. However, the real highlight here was the adorable young Lao girl who came up to us and very politely asked to practice her English with us. Turns out the current module she was learning all about was health, and so she determinedly tried to nail the pronunciation of ‘diarrhoea’ with us for a good 10 minutes before asking what it actually meant. Safe to say some giggles were stifled.

We had some absolutely scoff-worthy food whilst we were in Luang Prabang, and it mostly felt pretty healthy too, which was a bonus. The Street Food market here, albeit small, provided us with some hefty portions for a ridiculously low price. Ahh, the beauty of Asian street food.

After our chill time in Luang Prabang, we headed down South for some party time, after a traumatic mini-bus journey where I was wedged between two people being violently sick for the entire 3 hours. To add insult to injury, the minibus was driving very precariously near to a cliff edge and so I feared my own grisly fate.

Anyway… we were told Vang Vieng was going to give us similar vibes to places like Malia/Kavos. Luckily that was not so much the case as we went in low season, and despite having a few nights of drinking, we managed to complete some more respectful activities whilst we were there, too!

Tubing is an activity iconic (and slightly infamous) to Vang Vieng. Essentially, you plod into the (alarmingly strong) river in a rubber ring with a bunch of pals, let the (worryingly powerful) current take you along, and at different points stop off to the riverside bars to drink. People on the riverbanks pull you into these bars via ropes they throw in to you. Sound a bit unpredictable? It certainly was. I got lost on my own several times, which wasn’t really that fun, but still hilarious once I’d been rescued and could resume the day!

Vang Vieng was the first place we kayaked on our whole trip, and we discovered we actually really loved it. Admittedly the strong current on the Nam Song River perhaps made it all slightly easier (we were shocked and dismayed when we eventually kayaked in the actual sea and realised it requires some serious arm power) however it was an enjoyable and peaceful experience to say the least.

Not so much a highlight for the enjoyment factor, but more so for hilarity. We’d signed up for a day tour full of activities, not realising that Caving was a part of this. We were pushed into an extremely dark cave in rubber rings, with nothing but an old head torch and a small chance we’d get out in one piece, considering the cave ceiling (?) was alarmingly low and we had no helmets on. It was almost pitch black in there, hence the water was dark and the current was strong, so it all made for a rather spooky experience, I won’t lie.

Vientiane was certainly not the highlight of Laos – we only headed here for one night as we were catching a flight the next day and the city had the closest airport to Vang Vieng.

As it says on the tin; an enormous park filled with even more enormous Buddha statues and shrines. Vientiane doesn’t boast many attractions or places of interest, but this was nice to mooch around for a few hours in the sun. 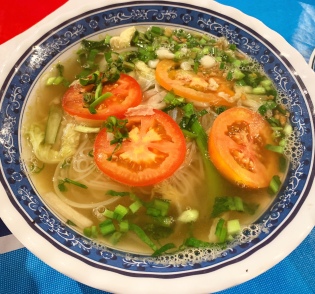 I felt sick the entire day we spent in Vientiane, so this warming, hearty noodle soup at the gigantic Night Market absolutely hit the spot. Hats off to Laos for giving us the best noodle soups we had in the whole of Asia.

And sadly, that’s all for today. As you can see, Laos is an absolutely incredible country and I would urge anyone to visit. I really wish we’d researched it a little more before our travels started and spent longer there; we didn’t know much about it, so stuck with the most popular destinations, and rushed a little more than we would have later on as it was right at the beginning of our trip. Laos doesn’t get as much tourism as its Thai or Vietnamese neighbours, however I could not recommend it more to incorporate in your travels or add to your bucket list.

Have you ever been to Laos? What were your highlights?