Hey everyone! I hope you’re all doing well.

As if I really need to incorporate more pizza into my diet recently (two trips to Italy=severe bloating) I had to jump at the chance of reviewing one of my most favourite restaurants in Brighton – Purezza. I say severe bloating – I wouldn’t be totally wrong to just admit it could be a slight weight gain due to my ludicrous carb/wine consumption as of recent, but I’m in a bit of denial, I won’t lie to you all.

In case you didn’t know, Purezza is an 100% vegan restaurant situated in the Kemp Town area of Brighton – in fact, it’s the UK’s first vegan pizzeria, so hats off to them! They pride themselves on serving up ‘plant-based versions of classic Italian dishes’ and I stand by this 100%! They’re also very, very good for gluten-free eaters, so if that’s your bag, check them out!

An all-vegan restaurant may either sound like the best thing in the world to you, or the equivalent of being condemned to eat in a hospital canteen – perhaps you’re vegan yourself, maybe just enjoy trying new things or you’re a self-confessed carnivore. However, I can hand-on-heart promise you that I’ve been to this restaurant several times already (and had takeaways) with people of varying diets and preferences, and everyone has thoroughly enjoyed it each and every time whether they’re a devoted vegan, meat-eater or not. Sometimes it’s nice to change things up and try something you never normally would! 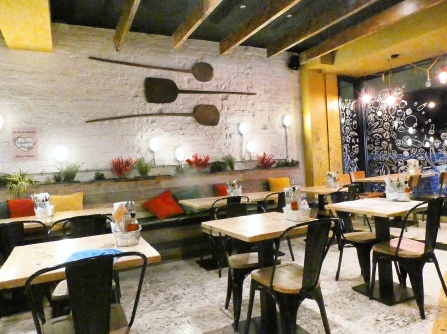 I usually just eat, well, pizza here (funnily enough) but for reviewing purposes (and the happiness of my tastebuds) we ordered a few things I’d not tried before! 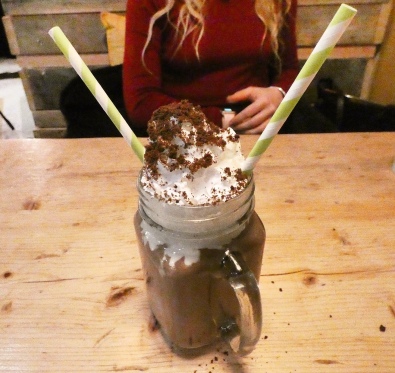 Starting with sweet, because why not have pudding before and after your main if it’s a possibility? We decided to share a Chocolate Oreo Milkshake and I’m oh so glad we did – it was super thick, creamy and just as delicious as you’d expect any normal Oreo milkshake to taste (because Oreos are vegan, FYI.)

I did admittedly almost choke on the crumbled oreos on top of the cream, although that’s probably just because I got a bit enthusiastic and excitable at the concept of a dessert-drink followed by pizza followed by a dessert pizza. The second of gasping for air was well worth it, anyway.

To start, we shared something naughty and something healthy just to balance it all out, ya know? A bit like when you eat a McDonalds and follow it with 2 litres of water to ‘wash away’ the bad stuff. Yeah… 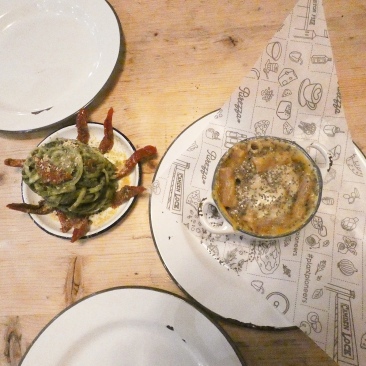 No, that’s not an octopus on the left. It’s their Courgetti Spaghetti, and on the right we have the Mac’n’Cheese. These are actually classed as ‘side dishes’ but we really fancied trying them before the main event.

I wish I could put into words how much flavour this had – the creamy pesto sauce was ridiculously tasty and so moorish. The sundried tomatoes added a lil’ something special to the dish and I genuinely could have eaten about 5 portions of this it was that good. 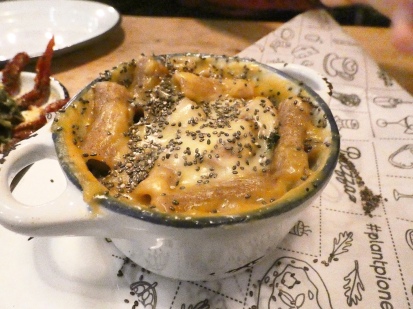 I believe they recently changed the recipe for their Mac’n’Cheese and I think it’s done them brilliantly – I much prefer this new and improved version! The top is amazingly chewy and crispy and underneath is gooey and creamy – again, just like how you’d expect a normal cheesy pasta to be! I’m not generally a fan of shop-bought vegan cheese, but this tastes miles off – not too strong, nice and mild and just delicious. 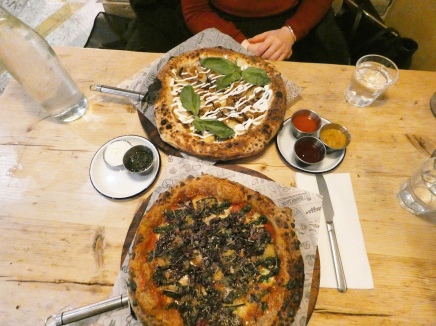 And now for the main event… these bad boys.

As an avid Purezza-eater, I’ve made a fair dent in the menu already and it’s always hard choosing which pizza to go for. My friend and I ordered two between us for a half-and-half situation, which I always love to do.

Firstly is this beauty: the Couch Potato. We had this on a regular sourdough base , and it comes with thinly sliced baked potato, smoked ‘mozzarella’, roasted aubergine, basil leaves, seitan and garlic mayo. My stomach literally just rumbled writing this.

I originally thought potato on a pizza was so wrong; too filling, too stodgy, but I was young and naive then and now I know that this pizza is what’s right in the world.

It’s so indulgent and I probably couldn’t finish a whole one (well, I could – I’d just need to unzip my jeans, but that’s fine.) I’d really recommend you get out of your pizza comfort-zone and try this if you find yourself in Purezza, as you’ll surely be pleasantly surprised.

Secondly is the Pesto Manifesto – probably my most-ordered pizza on their menu! They’ve recently changed the recipe for this and, I must say, I’m not the biggest fan of the change! The caramelised onions for me were a bit overpowering and really dominated the whole pizza, taking away from the delicious, light pesto flavour. If you love caramelised onions (like my friend who accompanied me and demolished her portion and half of mine) then you’ll be laughing – I just prefer them in much smaller, subtle quantities and I already knew and loved the old Pesto Manifesto!

We had this pizza on a Hemp base, which was delicious might I add – super light and not as chewy as its sourdough friend. 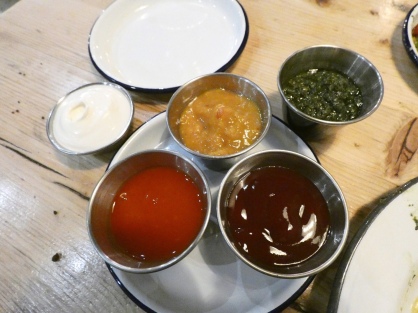 Let’s not forget one of the most vital components of pizza-consumption: dips! We tried one of each – on the top row left-right we have Garlic Mayo, Banana Relish and Pesto and on the bottom we have Sriracha and Barbecue Sauce.

My favourite dips by far are the Garlic Mayo, BBQ sauce and Pesto (how predictable of me.) I would drink Pesto if it was acceptable, Garlic Mayo is just a given, and BBQ sauce and crusts go hand in hand.

For me, the thought of Banana Relish with pizza made me shudder a bit, but I’m sure it would impress some more adventurous eaters out there!

We didn’t quite finish all the pizza and wanted to save room for a dessert, so we took the rest home in one of their lovely boxes – I love their simple packaging!

As said, I’ve been to Purezza many times but I’ve never saved room for a dessert. This time, I was determined to grow up and shovel one down.

I’ve had my eye on their Oreo Pizza for a while, and today was the day. Oh my LORD was it good.

It’s covered in a nutella-style chocolate and hazelnut spread and crumbled oreos. Basically, if you’re on a diet, put it on hold for a while to sample this, you won’t regret it.

It was super gooey and just ridiculously indulgent – you really wouldn’t notice it was missing the usual dairy! If you have space in your belly for this, do yourself a big favour and order one, even if it’s for takeaway!

One thing I would say is that I think the dough could be made sweeter, and it would be amazing served hot – I’m not sure if it’s supposed to be or not, but I think it would really ramp up the wow-ness if it was.

From then, our mammoth meal was complete. As usual, they delivered the goodness and friendly service and I can’t wait for my next visit – things I’m already thinking about ordering for next time (and staring/drooling at on their Instagram page) is the Telling Porkies pizza, Lasagna Classica and Salted Caramel Brownie. 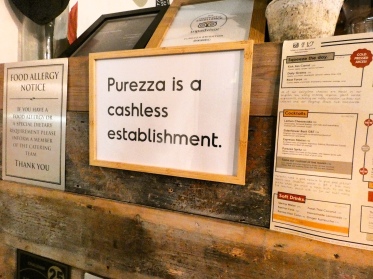 Something to note is that Purezza have recently gone ‘cashless’, so you can only make card payments. I’m not entirely sure what the reason for this is, but remember it in case you decide to try it any time soon!

Have you ever been to Purezza? Did you love it as much as I do?

*Our meal at Purezza was kindly free of charge in exchange for an honest review. This in no way has influenced or changed my opinion of our experience.