Back in November my boyfriend and I stayed in London for our 3 year anniversary. We wanted to go somewhere really special for our evening meal, and The Shard immediately came to mind for me.

Despite being rather scared of heights and imagining a dramatic death every time I rise above 10 metres, I had a look online and the restaurants up there looked unreal. There’s about 4 or 5 I believe, and we took an interest in Oblix, because, I’m not gonna lie, the others were just way too expensive for my appalling bank balance.

Of course, Oblix is pricey – you’re dining in one of the most famous buildings in the world in London city – it ain’t gonna be cheap, is it? However, the other restaurants were just knock-your-socks-off expensive – like, millionaire expensive, and certainly not in the price range of an apprentice. So, off to Oblix we went. 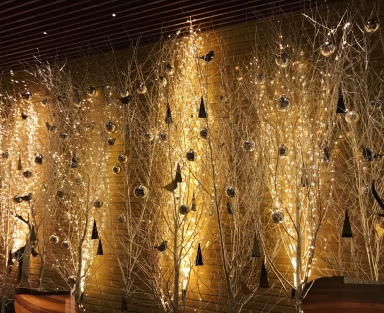 FYI – you have to go through security before you go up in the lift, so you need to allow a little bit of extra time if you’ve made a booking – just 5-10 minutes will be fine.

I was a bit apprehensive to go to Oblix, simply because the reviews I’d read were so varied. Some were absolutely incredible, 5 stars all round, whereas some were 2* or even 1*. Suspicious.

I soon learnt that a great deal of the negative reviews were simply complaining about the prices. Like I said, you’re eating dinner in The Shard… you’ve got to expect bigger prices than what you’re used to. One review even said ‘next time I’ll go to Nandos!’ Hmm, I’m not entirely sure you could compare the two, contrasting a Medium Chicken Wrap with a Fillet Steak, or a bottomless Fanta for a glass of champagne. I love me a cheeky Nandos more often than is healthy, but for our anniversary we wanted something super-duper.

We ate in the ‘East’ side of Oblix – I believe East and West serve the same menus, but in different settings: East is more of a laid-back, buzzy vibe whereas West is more sophisticated and formal. I would have rather booked West but it was full, however, I was actually really pleased with East and so glad we’d got a table there  – we went on a Saturday night and there was a DJ and a fab atmosphere – perfect for the weekend but still with a classy, upmarket feel.

We were so bloody happy when we were taken to our table and it was right in the window – our view was incredible and I only thought I was going to pass out like, twice. 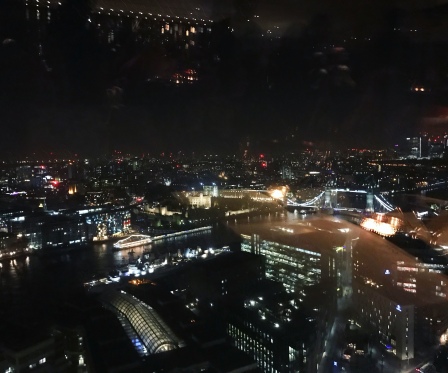 If you’re going for a special occasion, make sure you mention it upon booking. You’re not allowed to reserve window seats which is really annoying, but I’m pretty sure they gave us a prime spot because we’d mentioned it was our anniversary celebration. They also congratulated us when we arrived, which was really nice and personal.

Before we ate, we sat at the bar and had a glass of wine each. The bartenders were so friendly and really knowledgeable about everything on the menu (a bit like how I feel in Tesco, perusing the cheap Echo Falls.) Instead of using your bog-standard ice cubes, they had a giant crystal clear ice block and were shaving pieces off to whack in cocktails. Clearly, I’m very easily impressed.

After sitting absolutely mesmerised and so blissed out by the view, we ordered our usual starter – artisan bread and olives, obviously. Oh, and what stunning bread and olives they were.

After scanning the menu for about 10 minutes (even though I’d already google searched for it approximately 576 times before visiting) I decided to go for the Wild Garlic and Mushroom Risotto. Now, I won’t lie – I was a little disappointed with how unadventurous the veggie options were. Mushroom Risotto is generally my order on around 50% of my total restaurant visits; not because I’m mad for it, just because it’s usually the ONLY BLOODY vegetarian option on the menu. Breathe, Dayna.

Considering Oblix is a high-end restaurant, I was miffed that there wasn’t something more exciting on the menu. Nonetheless…

I’m not just saying it, but it was the best risotto I’ve ever had. 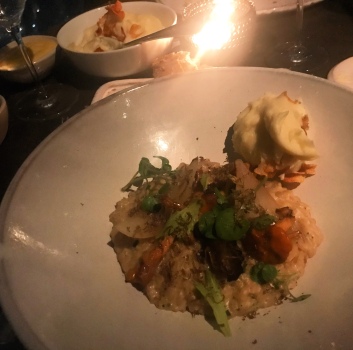 It was so flavourful, creamy, and I did steal a bit of my boyfriends salsa verde which added a beautiful tang. Eurgh, who do I think I am, Gordon Ramsay?

My boyfriend went for the steak (if you know him, that’s no shocker) which he said was lovely. I also persuaded him to go for a side of Mashed Potato with Garlic Crisps, and what a brilliant decision of mine that was. I deserve a pat on the back for being so demanding.

Overall, the meal was bloody gorgeous and we really didn’t want to leave. Actually, that’s a lie – by the end of our meal I saw a flashing plane in the distance and started drafting my farewell texts to family members, but that’s irrelevant.

What’s even better, is that they really took into account the fact it was our anniversary and gave us this at the end of our meal: 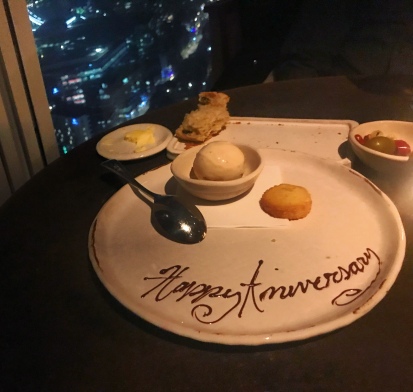 Oh, I bloody love a personal touch, I do… especially when it’s of the edible kind. 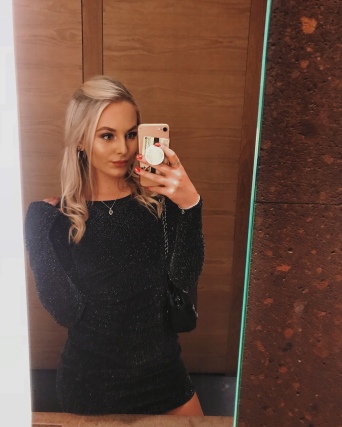 And, really, what would the evening be without a toilet selfie?

Overall, I absolutely loved Oblix. I couldn’t recommend it more for a special occasion, and I’m dying to return – it’s the perfect excuse to get dressed up for something a lil’ bit special.

Have you ever been to Oblix? What did you think of it?

Love reading restaurant reviews? Check out some more below!

The Huntsman of Brockenhurst, New Forest

3 thoughts on “Review: Oblix East at The Shard, London”