Today’s post is all about my trip to Milan back in July. My boyfriend and I visited for a couple of days at the back-end of our Italy trip beginning with Lake Como, which was utterly amazing.

However, Milan? Not so much! To be totally honest, it’s not what I was expecting and I was disappointed. I think it’s the only place in Italy I’ll ever say disappointed me!

We’d booked an Air BnB to stay in, which was advertised as in the Navigli area. Unfortunately, we soon learned that we were actually around a 20 minute walk from this area – not exactly what we’d hoped for, but never mind!

It became apparent to me quite soon after arriving in Milan that it wasn’t the dreamy, flashy city I’d expected it to be (but it still had the extortionate price tag!)

During the 20 minute taxi-ride from the Central station to our apartment, all I really saw was… well, graffiti, graffiti and more graffiti. I’ve honestly never seen a city with so much of it. I’m aware I sound like an old Granny right now disgusted by vandalism, but it really was an eye-sore!

Everything just looked super grubby, and all the shops/cafes were either shut-down or covered in, of course, graffiti. God, I should really join neighbourhood watch or something.

Through sweat-blurred eyes, we made it up to our apartment and proceeded to, uhh, perish for a while. It was 36 DEGREES In Milan that weekend and our apartment had no air-con, just a meagre fan blowing lukewarm breeze over us. As you can imagine, this was quite the discomfort, although through no fault of anyone but ourselves for not checking first!

Anyway, we got ourselves ready (makeup sweating off my face) before heading out into town. We went to the ‘Galleria Vittorio Emanuele II’ (cor, that was a mouthful) area for dinner as it’s a big landmark in Milan and there was plenty of choice to eat there. It really was a gorgeous place to have dinner, and felt really upmarket and sophisticated.

We ate in ‘La Locanda del Gatto Rosso’ and all in all, I really couldn’t fault our meal! The service was spot-on and within 5 minutes of sitting down we’d already been greeted with water and the most delicious bread basket I could have wished for. Trust me, even after 6 days of consuming copious amounts of bread for breakfast, lunch and dinner, nothing was stopping me diving into that!

I thought I’d go authentic and try the traditional Milanese saffron risotto, served in a cheese crisp bowl. It was AMAZING, I’d definitely recommend it to anyone visiting this city.

We were quite tired from travelling, so pondered over going for a cocktail or not. We’d travelled on a Sunday, so lots of bars were actually shutting early, and in the Duomo square, prices were COSTLY. I’m talking around 20 euros for one drink. Ouch.

The Duomo square (Piazza del Duomo) was undeniably breathtaking. The building really was an incredible spectacle and it was gorgeous to look at, but we soon learnt that this was pretty much the only ‘pretty’ area of Milan, and thus the most expensive. Sods law.

The next day was a day packed full of sightseeing for us. We got tickets for the hop-on/hop-off bus and, ironically, hopped-on and hopped-off all day.

You can go inside the Duomo and have a look for free, but we paid a bit extra to walk all the way to the top for the great view. Bare in mind the heat was EXCRUCIATING (nah, you’re the dramatic one) so it was a bloody hard walk to the top but worth it for the views.

Another place I’d recommend a visit to was Sempione Park – a massive green space perfect for a walk, and it also had an aquarium, too. Watch out for those mozzies, though.

On our last night, we weren’t massively hungry (and didn’t have a champagne budget, either) so we decided to head to Navigli (the canal area of Milan) to experience a proper Italian ‘aperitivo’. Aperitivo is an (amazing) Italian tradition where you have a pre-dinner drink, and it’s served alongside free food. Erm… best idea ever? 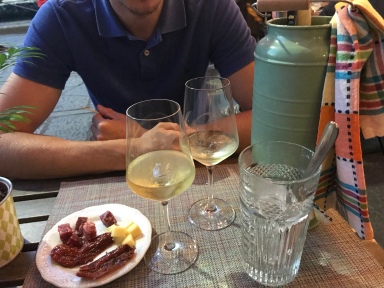 We really liked the Navigli area with it’s huge array of aperitivo bars and restaurants – it was far more enjoyable and affordable than the centre of Milan. But… I will say that when it’s hot (which it really was) the mosquitoes are genuinely unbearable around the canals. I’ve always been super lucky and never get bitten, but the mosquitoes were so bad in Navigli that I counted about 10 bites on my legs after visiting, and my boyfriend had around 30!

In fact, we soon learnt that Milan in general is a hotbed for the pesky bastards. Apparently this is because the city is built on swampland, so if you’re heading there any time when the weather is baking, pack insect repellent x100. Thank me later!

Of course, about 3 bottles of wine were sunk that night – it was our last night of the holiday. When in Rome and all that. Or, uhh, Milan.

I can’t remember for the life of me what the bars we visited were called, but the nibbles in the second place we went to were UNREAL. We ordered a dessert there called a ‘chocolate cigar’ which was quite literally a massive piece of chocolate in the shape of a cigar, strangely enough. My boyfriend was shocked and dismayed when it turned up and it wasn’t a real one, though. I think the Pinot Grigio had got to him by this point.

I feel like Milan would be great if you’re into designer shopping and art galleries, but that’s just not me! It had such an industrial feel to it which I’m not a fan of at all, and I guess after visiting naturally beautiful Lake Como, it was a big clash.

I’m glad I went as it’s always been on my list, but I certainly wouldn’t return and, to be honest, I wouldn’t urge anyone else to go 🤷🏼‍♀️

We found ourselves lacking options of things to do by the end of our short stay, and, let’s be honest, in 36 degree heat, a smoggy city with no swimming pool in sight isn’t ideal, is it?

As for other Italian city breaks? I’d really love to visit Rome, Venice & Verona. Let me know what you thought of them if you’ve been to any before!

Want some more city break inspo? Check out some of my other posts below!