Hi everyone! I hope you’re all doing fabulously.

Last month I went on holiday to Italy with my boyfriend Jake – we visited two places on our trip: Lake Como and also Milan, which I’ll be writing about soon.

Lake Como is one of those places that literally looks like a postcard; completely breathtaking and just so naturally beautiful! I’ve wanted to go for quite a long time so was really excited to just get there.

To get to Lake Como, the closest airport is one of Milan’s (Malpensa or Linate.) It’s only ‘an hour and a bits’ drive away, and I would highly suggest that if you’re thinking of going, take enough money for a taxi! We looked at taxi’s and saw they’d be about 150 euros which sounds excessive but, seriously, if you can save some extra money for it, do it!

We took public transport which was cheap but SO long and SO tiring… especially in the heat. Next time we go we will DEFINITELY be scraping together some extra pennies so we can afford a cab… it’ll be worth it!

Upon arriving (finally) it was safe to say I was feeling a bit hot and bothered after what felt like endless trains and the longest, sweatiest bus journey I’ve ever been on. Okay, the total journey was only 3 hours, but it felt like about 65 dehydrated, exhausting long hours with a rumbling tummy, dreaming about carbs. Moaning over, let’s get stuck in.

We’d booked an AirBnB in Menaggio for 5 nights and were SO excited to get there, mainly because we knew the view was going to be incredible. You had to climb up a LOT of stairs to get to it (which I did, ‘effing and blinding’ as my Mother would say) which was a bit of a nightmare in 30 degrees celsius, wearing floppy sandals and sporting a savage blister, but once we got to the top it was all forgotten. I know I said the moaning was over, but anyone who knows me knows I love a good moan. ANYWAY….

We couldn’t have been happier with our apartment. It was a lovely, shabby-chic style room with a bathroom, balcony and private terrace. 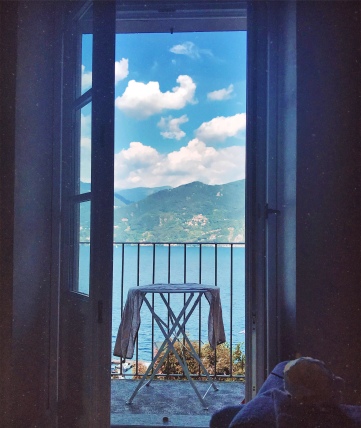 Our host sold us a bottle of prosecco from her wine cellar (which was SO cold, I could’ve cooled off in there for hours) and gave us loads of local tips, tricks and recommendations for restaurants and attractions. Our apartment was filled with loads of small but thoughtful touches, too, like wine glasses, candles, glass bottles of water and more. Little things go a long way!

She also sat us down with a very welcomed ice-cold shot glass of limoncello each – of course, as Brits, we see a shot glass and we damn glug that thing, whatever liquid it is.

After she looked at us rather confused, she explained that you’re actually supposed to sip limoncello and not down it like a sambuca. Noted. 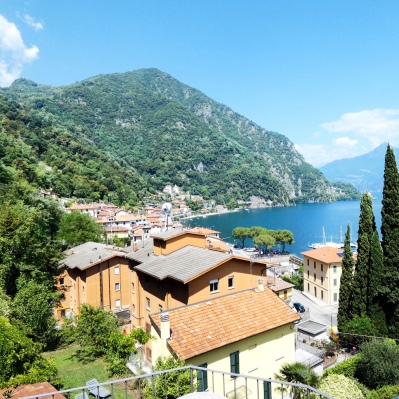 That evening, we headed out to eat some sought-after pizza (surprise surprise) and had a chilled night on our balcony with a bottle of bubbly, just relaxing and taking it all in.

Our balcony was such a great spot to sit of an evening; chatting, drinking and just enjoying the views. Keep in mind with Lake Como that there are a LOT of thunderstorms – luckily for us, these were mostly at night when we were sheltered! We did spend one afternoon just sitting on the balcony watching the lightning bolts, which, for someone who despises rain like it’s the Devil, I actually found it quite entertaining.

As for the daytime, there are plenty of things to do in and around the lake. The highlight for us was hiring a speedboat for a couple of hours – it’s a little pricey but totally worth it and such good fun. After being very quickly taught how to drive this mini beast (and my boyfriend pretending he knew what he was doing, nodding intently) we were bombing about the lake, taking in all the sights. 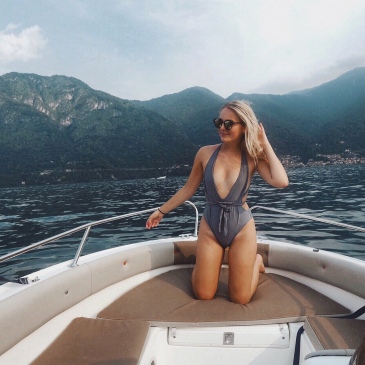 I mean, despite being scared for my life several times, it was fabulous. I say scared for my life, because my boyfriend got a bit too excited and it felt like he was driving the equivalent of about 100mph. To say we quite literally flew over the lake is a massive understatement. 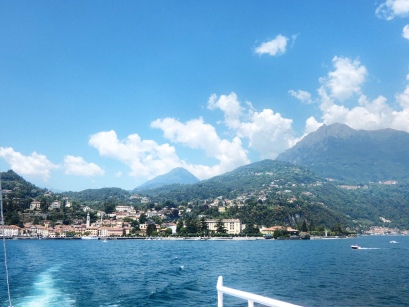 We really wanted to do this again but unfortunately it was fully booked so we didn’t get a second chance! If you find yourself at the lake, make it your mission to grab one before they get snatched up!

In the lakeside towns, you have really easy access to other areas by ferry. We visited Varenna, Bellagio and Bellano (all about 15-20 minutes by boat) – Varenna being our favourite by far. In fact, if we go back to Lake Como (which we certainly will), we will most probably stay in Varenna! See below for some snaps of the village.

I loved these bright, vibrant art pieces this man was painting on the side. If I had my own house I would’ve bought all of them!

As for Bellagio, of course it’s still stunning but it wasn’t our favourite area. If you like shopping you’re onto a winner as Bellagio boasts an array of designer shops, however we thought Varenna was a lot prettier and had nicer restaurants etc.

We visited Bellano another day for a spot of lunch (probably our 568th pizza that week) and to visit the Orrido Di Bellano – a 15 million year old natural canyon with waterfalls, which you can walk through on a suspension bridge. It was very quick to get through, but also amazing to look at so if you find yourself in the area I’d definitely recommend it at only 4 euros a pop. 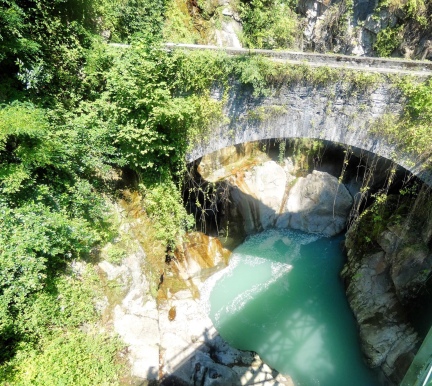 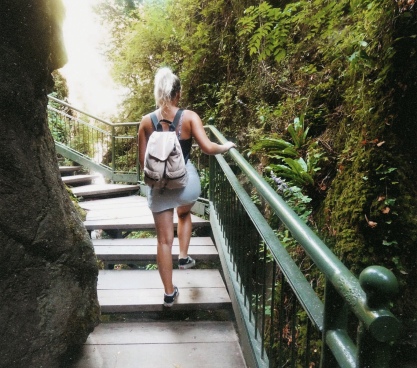 Aside from tourist attractions, it’s so lovely to just sit and admire the views. The lake does have small ‘beaches’ where you can sunbathe and go for a dip, but obviously I was too much of a wimp to swim properly. (Everyone said it was warm, but that shit was COLD.) Instead, I spent most of the trip convincing myself I would dive straight in like an athlete and show off my front-crawl, but actually just getting up to my hips, belly bloated with pasta and whimpering like a scared cat.

As for evenings, I can recommend some lovely restaurants, although, I have to say, despite the fact we were in Italy, not all of the food was amazing and a lot of the restaurants were serious tourist traps.

Funnily enough, though, our absolute favourites were Il Ristorante di Paolo and Osteria il Pozzo, both of which were of course recommended by our host. Locals know best, always!

We reserved a table outside Il Ristorante di Paolo and it was the most gorgeous, relaxing setting at dusk; warm breeze, a cold bottle of Pinot and fresh bread at the ready… until the heavens decided to open and every customer had to run for cover inside the restaurant. Sods law, isn’t it? 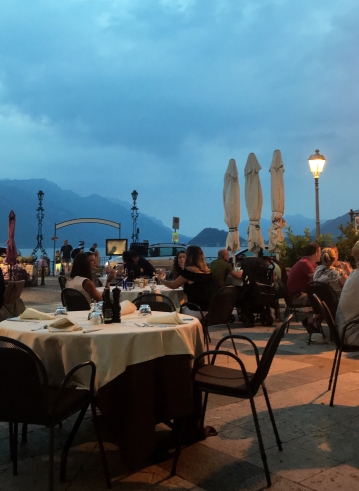 Luckily, we were seated inside ASAP (with dripping hair) and by the time we’d eaten, the rain had got bored and packed up, so we could finish our bottle of wine outside.

Osteria il Pozzo was a smaller, cosy, authentic restaurant with a daily-changing menu and the best service we had the whole trip!

One place I would tell you to avoid at all costs would be Ristorante Del Porto. I mean, if you look at their TripAdvisor, you’ll know that nobody exactly raves about it, but being the stubborn person I am we ventured there for a drink anyway because it had a lovely lakefront setting and just looked nice.

After being ignored by about 3 waiters, I asked for a drinks menu and was told ‘no’. Uhh, fair enough. Turns out they don’t have drinks menus, so the waiter literally stood there pondering what they had behind the bar and listing it all by memory. Well, it’s an experience, isn’t it? This all happened with a very drunk Australian lady slurring in one ear and 2 very loud German men saying ‘hello’ to me in the other whilst my boyfriend was in the toilet, so you could say it was an interesting one at that! Trust TripAdvisor, people.

I’m honestly not sure what else I can say about Lake Como, other than it’s absolutely beautiful, I would go back in a heartbeat and I would urge everyone to visit! It’s such a short flight from the UK, you’ve just got to give it a go.

We visited Milan for a couple of nights after Lake Como, however it was a completely different experience. I’ll be posting about that on the blog soon, so keep your eyes out for that one!

Have you been to Lake Como before? What were your favourite parts about it?

Need some more inspo for your next holiday? Check out some of my other travel posts!