Hello everyone! I hope you’re all doing well.

Again… I am sorry for the slight lack of posts recently – I’m living between 2 places at the moment and everything is very up in the air and unorganised. As soon as I move back to Brighton permanently, there will be an abundance of blog posts, I assure you.

Today’s blog post is a pretty random one, but I thought it would be a great addition to my website. It’s all about those wonderful things we have called eyelashes. Now, in recent years, long eyelashes, especially extensions, have become all the rage.

Personally, I’ve never had eyelash extensions – admittedly, they do look fab, but A) It’s just more £ that I don’t have (although I’m sure I can scrape enough together for a Nando’s or a bottle of wine) and I’ve heard the upkeep is kind of annoying with them (such as not being able to get them wet.) I could be totally wrong, but I just don’t think they’re for me. Saying that, there’ll probably be a post on my Instagram in a few months with the caption ‘loving my new lashes!’ Sigh.

Depsite the above issues, even if I say so myself, I often get complimented on my eyelashes. I don’t really know why, but they seem to take very well to certain mascaras and others not so much. Sooo… I thought I would write up a little post with some very unprofessional but tried-and-tested advice on how to get those things long and voluminous, including my favourite mascaras which you just need to purchase!

These are my lashes without any product on. Obviously, they’re not knock-out, blow-your-mind spider lashes just yet. But, considering there is not even a slither of mascara on them, they look alright to me. I put this down to…

Ah, the humble pot of Vaseline in all its glory. I’m pretty sure this is a staple product in everyone’s household (like it’s equally useful friend Sudocrem.) Both don’t really do much, but we still continue to purchase for our entire lifetime.

But, in all honesty, I put Vaseline on my eyelashes a couple of nights a week and I do think it makes a difference in growth and hydration. Yes, you may look like you have a serious case of conjunctivitis, but this is why you do it at night time! Fit it into your normal evening skincare routine, hop into bed straight after and nobody will look at you in disgust because they think you’re spreading a gooey infection. Perfecto.

I have no clue why, but when I used to apply mascara, one set of eyelashes would ALWAYS be longer and thicker than the other, and it made me want to smash a plate into the mirror (or anything fragile, for that matter.) Since thickening them up with Vaseline, this no longer happens. Problem solved!

Obviously though, if you want loooong lashes, you will wear mascara. I have tried about 20 mascaras in my lifetime and most are utterly crap. Personally, I like the very long, black eyelash look; I know that’s not for everyone, but it’s definitely my preference, so the below recommendations are best suited to that style!

I literally recommend this mascara to everyone:

The Maybelline Falsies Volum’ Express mascara is honestly the best drugstore mascara you will get, trust me. It’s meagerly priced at £7.99 which really isn’t too pricey, and you’re getting a quality product with amazing results.

These are my lashes after several coats of the mascara. As said previously, I do load up when I’m applying mascara, because I prefer the fuller look. However, this mascara is soooo buildable and I often just wear one quick swipe for a ‘natural’ day when I’m sitting around the house wearing concealer and lip balm. There is nothing worse than applying coats and coats of a rubbish mascara and ending up with flat, thick and clumped lashes – however, you certainly will not get those results with this!

My second recommendation won’t come as a surprise – it’s the Benefit They’re Real mascara which I’ve mentioned many times in previous blog posts.

I do love this mascara and use it regularly, but I have to say it’s not worth the nearly £20 price tag. Yes, it gives amazing results, but as you’ll see, its not that different to the Maybelline mascara, which is a fraction of the price.

However… Benefit is a high-end brand with fabulous products and gorgeous packaging, so a mascara like this would make the perfect payday treat or gift. Also, it has many, many positive reviews, so you’d know you’re buying something worth it. 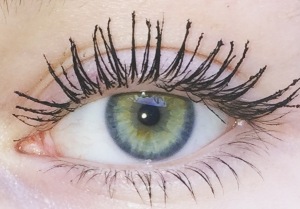 As you can see, it gives a slightly darker lash than the previous product, so I prefer to use it in the evenings or for nights out rather than in the daytime; it’s very voluminous and perfect for a dramatic eye look. You do have to be slightly careful with it though – it’s very thick and can clump easily.

Another thing I would point out is that a primer can work wonders. No, I’m not talking Porefessional – Benefit actually do a matching ‘They’re Real’ eyelash primer!

Since the mascara can be quite thick, I think using a primer beforehand is a very good idea, since it helps to thin out and separate lashes, avoiding clumping.

So, these are the simple but worthwhile recommendations I have for gaining long lashes! Personally I don’t bother with eyelash curlers and all that jazz – for me, they don’t do much. Not very exciting.

And, if all else fails… whack on a pair of falsies. (Ardell Demi Wispies are the best.)

2 thoughts on “How To: Super Long Eyelashes 👁”