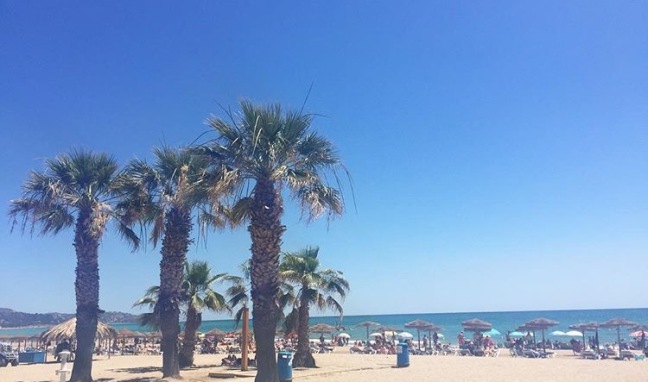 Today’s post is going to be very similar to my ‘7 Nights in Zante’ post, so if you enjoyed that… keep reading!

Benicassim, as most people don’t know, is a small, quiet town in Spain. However… for a week in July every year, the quiet turns to manic noise as there is a 4 night long music festival there. I went in both 2015 and 2016, and honestly, it was THE BEST time of my life.

In 2015, my friends and I had never been on a ‘girls holiday’ before, so Beni was our time. We were all 17, ready to fry ourselves in the sun and get hammered every single night on the cheapest possible alcohol sources we could find. To our absolute delight, the local supermarket stocked 70cl bottles of vodka for all but 4 bloody euros. This was a deal breaker. We knew we’d be returning again.

The festival itself was only £130 (compared to most English festivals, that’s an absolute bargain.) With the festival ticket, a weeks worth of camping is included, so if you’re looking for a budget festival/holiday getaway, this is the perfect idea.

However, we wanted to be difficult. None of us particularly fancied camping in horrendous heatwave conditions (I’m talking 30 degrees minimum), sweating like we had never been introduced to the magic that is deodorant and crawling back to an uncomfortable, reeking tent at 7am.

So, we booked an apartment instead that was literally a 5 minute taxi journey to the festival grounds. Perfecto. We actually had normal beds (thank the Lord) a working shower and bath, and a huge balcony which became the hotspot for doing our makeup and having pre-drinks (or 10.)

The apartments we booked where we stayed both years were called ‘Apartamentos Estoril’ and were slap-bang on the beach. I mean, they weren’t exactly glam, but they’re ideal if you’re on a budget and aren’t too keen on living in a sauna/tent for the week. It also came with a pool, which was lovely. Honestly, I think we quite mistreated the place but in the most hilarious ways possible. On our last day having to check out by 10am, we spent the entire morning frantically cleaning the bathroom and kitchen, as we’d allowed it to become pretty manky over our week of unbelievable sweating and no cleaning whatsoever (the apartment, that is. Not ourselves.) The bathroom was essentially a mud-bath/sand desert. Camping probably would have been cleaner.

We also tended to use the balcony as a kind of bin, pouring old bottles of water down the edge and seeing who could ‘throw tomatoes into the pool’. Very immature, I know, but it provided us with a load of laughs, especially when I emptied an old glass of water off the balcony edge, unaware that it had splattered over a car containing a very angry local lady shouting abuse at me in Spanish for the next hour whilst we hid inside with the doors locked.

The festival itself I would 100% recommend to anyone. It had a really good mixture of sing-a-long music such as Florence and the Machine and the Kaiser Chiefs with a separate area for dance music, as well as tonnes of bars and food stalls. It literally has everything you could want in a festival.

On the few nights we were in Benicassim with no festival to attend, we ventured into the town to find a bar or any kind of decent drinking spot. We were delighted to find a club promoter giving out wristbands for ‘free entry’ at a popular club… only problem, the walk there was about 25 minutes, but we figured it would be worth it for free entry, right?

The slight issue was that after a long walk and then an equally long queue wait… essentially, it wasn’t free, and the owners were trying to con us out of 15 euros each despite everyone donning ‘FREE ENTRY’ wristbands. Fantastic. Instead of paying to go in, we turned around screaming to everyone eagerly waiting that in fact, it wasn’t free, starting some sort of riot with everyone going mental and leaving the club. Oops.

One thing we struggled very slightly with in Benicassim was the food. If you simply wanted a bowl of chips then you’d be alright (but don’t request vinegar on them because you’ll be looked at like you just asked for the blood of an innocent child.) Apparently vinegar on chips isn’t a thing in Spain, which I never knew… maybe it’s just a regional thing?!

On our first ever night in 2015, we found a decent-looking restaurant right on the beach where the owner told us it was 3 courses and a cocktail for 10 euros. Oh, so young and naive we were, we actually thought this sounded nice. Oh dear, oh dear, oh dear. Let me just explain what the meal consisted of: raw fish, dog-food burgers, and their ‘half-rack of bbq ribs and fries’ meal actually consisting of 1 rib with no sauce and a packet of soggy, ready-salted crisps elegantly placed on the side, with the waiter aggressively slamming the plate down on the table, asking in a very shouty voice who ordered the ‘MEAT?’ as if the dried up old bone on the plate actually represented anything of the kind.

Considering  it was our first real taste of ‘freedom’ in Benicassim and our first holiday with no parents, I think we all did quite well to avoid chucking up some of the dire food we ate and the copious amounts of red-bull… apart from one delightful incident on the first night of the festival, when one of us attempted to bring an open bottle of wine into the taxi and were sharply told off. Seeing as this entire bottle of wine cost all but 99 cents, it couldn’t possibly go to waste. So, it was downed in 10 seconds, and then shortly made its comeback all over my feet. I did promise no names would be mentioned in this post, but I’m still not over it. So thanks Meg.

As well as this lovely incident,  someone spent an entire night hanging over the balcony retching and gagging after one too many sips of the luxury 4 euro vodka. Brilliant. Well, it wasn’t really brilliant because the vodka victim missed the whole last night of the festival and instead spent the evening lying in an icy bath crying to their Mother on the phone. But yeah, anyway… sorry Mum.

More apologies to Mothers… oh dear. Two of my friends decided that on the last night, it would be a fantastic idea to get matching tattoos. Despite the rest of us looking on in trepidation at the, um, beautiful designs being inked onto them for life, they insisted they loved them through watery eyes and the realisation that they had fucked up.

I think by the second year, we’d obviously all matured a little bit more (well, according to the above photo, apparently not.) We now understood the importance of smothering your body in sunscreen when the weather is so hot you could fry an egg on the ground. After a scarring experience in 2015, I wasn’t getting burnt again. God knows what happened, but we all returned home at 5am or so and were red raw. Literally, we looked like walking tomatoes. My friend laughed for about 5 minutes straight when I lifted up my top and, to my horror, realised that I resembled a prawn.

Luckily, Benicassim is a really gorgeous, pretty town so it was the perfect place to wind down after a heavy night. Just look at that amazing beach! 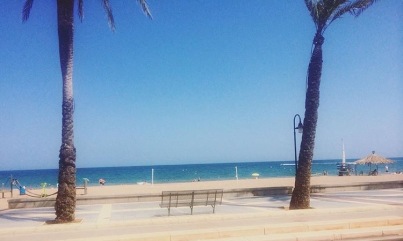 All in all, as I’m sure you can tell from this blog post, Benicassim provided me and my friends with so many amazing memories and laughs over those two years. We will all definitely be returning at some point in the future!

If you’re looking for a festival abroad, I would recommend Benicassim to absolutely anyone! It has the perfect mix of a holiday/festival and alternative nightlife to clubbing.

We rounded off our first girls holiday abroad dozing in Barcelona airport, and then suddenly realising that we had 5 minutes until our gate shut. So, we ran screaming through the airport with our suitcases in tow while my friend was struggling behind, yelling “my trousers are falling down!” Good times.

So, that’s my post about Benicassim! I really hope you guys all enjoyed it.

Have a good weekend everyone.

P.S – pay a visit to the water-park whilst you’re there. You’ll probably be too sleep deprived to enjoy the deathly flumes, but it makes for a nice photo.